THE FEAR OF SMALL CLUSTERS OF HOLES

Trypophobia is not recognised by the American Psychiatric Association’s DSM-5 as a phobia. However, I recently had the opportunity to speak with someone who believes that he has Trypophobia, he is not in treatment or on any kind of medication to treat this phobia as it only occurs when he sees or is in direct contact with small clusters of holes that looks like the image below. 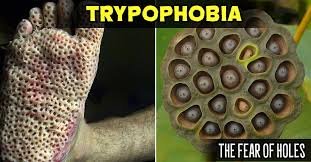 What exactly is Trypophobia?

Trypophobia is a condition where a person experiences a fear or aversion to clusters of small holes which is thought to be triggered when a person sees a pattern of small clustered holes, bringing about symptoms, such as fear, disgust, and anxiety.

Trypophobia is not currently recognized by the American Psychiatric Association’s Diagnostic and Statistical Manual of Mental Disorders (DSM-5), although the term trypophobia has been in use since 2009.

Look at some facts on trypophobia:

A person with trypophobia experiences symptoms, such as fear, disgust, anxiety, goosebumps, and panic, on seeing clusters of small holes.

There is conflicting research as to whether the condition is, in fact, a genuine phobia. More research is needed in this area to validate the condition.